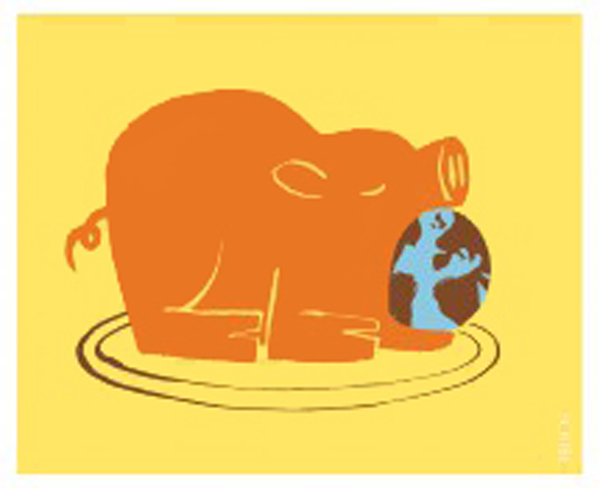 Catherine Mah reviews The End of Plenty, a new book looking at the problems and solutions we’re faced with as the world’s population keeps growing.

What happens if/when we run out of food for the planet? For environmental journalist Joel K Bourne Jnr, ‘producing food for more than 9 billion people without destroying the soil, water, oceans, and climate will be by far the greatest challenge humanity has ever faced’.

His book, The End of Plenty, looks at this very issue. As the human population increases and demand for food rises, riots break out. At the same time, climate change, pesticide resistance and political maneuverings mean that there’s less supply and the distribution of what little there is, is uneven. The poor are getting poorer while the rich are getting richer. And nobody’s happy.

A journalist and reporter for National Geographic with a background in agronomy, Bourne is well placed to look at the problems with our global food system. He starts with a look at mathematician Thomas Robert Malthus’s theory: if both agricultural production and birth rate continue to increase at a steady rate, then the world is on a collision course with starvation. The problem is that human population growth can be exponential, while food production simply can’t. Our land, water and resources are finite.

And this is what’s happening in developing nations. India is increasing its population by the size of Australia every year. Niger boasts a fertility rate of 7.6 births per woman, the highest in the world. At the same time, volatile weather conditions are destroying crops, increasing desertification and lowering productivity.

The Green Revolution of the 60s and 70s seemed to be the answer. During this period, scientists managed to engineer disease-resistant, fast-growing crops, increasing the production of wheat, rice and corn several fold. While this seemed a miracle then, the effects are being felt now. The dependence on certain strains of seeds means there’s a lack of biodiversity, a major problem when diseases target specific crops. The overuse of pesticides has created superbugs and destroyed the quality of our soil, not to mention impacting the health of the workers who are in close contact.

Add to this our exploding global population and the rise of the middle class, and you can see why long-sighted governments are getting worried. China is the world’s biggest consumer of soy, and it’s not by humans. The demand for meat from the nouveau riche has driven up the demand for animal feed and parts of the Amazon are being razed to grow soy crops for pigs, which is fuelling climate change.

Bourne also covers problems with biofuels, and the complex web of politics mixed with corporate greed that means food just isn’t reaching those most in need.

So what are the fixes?

The second part of The End of Plenty is slightly more reassuring. It looks at innovations taking place around the world now, from organic aquaculture and deep ocean fish farms to breeding plants to resist drought, flood and other effects of global warming.

Bourne argues that if small farmers and corporations work together, they can reduce global poverty and provide food for the nations. In African countries like Mozambique, the land is plenty and the manpower available. What they lack is the infrastructure to create large-scale farms capable of producing crops to feed the world. They need investment from ethical multinational corporations to bring these projects to life.

Other long-term answers are smarter irrigation so desert zones can become hotbeds of production and simply, having less children.

The solution in the bedroom

Yes, you read right. Faced with an exponential population growth curve and dwindling crop returns, if we can’t increase the latter, we should attempt to curb the former. Studies have shown that ‘girls who get at least seven years of schooling marry later and have far fewer children than those who don’t’. So perhaps the biggest difference we could make doesn’t even have anything to do with food, but closing the gap between males and females and funding family planning services in developing countries.

So, should I pick up a copy?

For anyone interested in food production and the many forces behind the global food industry, The End of Plenty is a fascinating read. It’s extensive, looking at the influences of governments, private corporations and the IMF on food supplies in Africa to Asia to America. It’s factual without being dry. It brings Bourne’s journalistic eye to the fore, spotlighting characters and personalities before zooming out for an expansive view on global food issues.

If, however, you’re looking for something that will let you sleep better at night, this book may not help. Readers will be left wondering what they, as individuals, can do. And Bourne’s implication is: it’s up to governments, organisations and highly specialised individuals to spur on change. As he says, ‘we are locked in a never-ending two-step between our numbers and the sustenance we can wrest from 6 inches of topsoil.’ The soil that governments and a new wave of farmers and scientists are invested in.

Bourne does touch on some actions we can take. You can have less kids. Eat less meat, be more sustainable in your everyday life. Support causes that aim to close the inequality gap. And importantly, advocate for the change you want to see.

Write for Otter
How to help your workplace green up