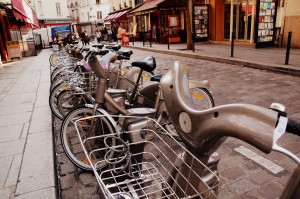 Need a shovel? Head to the hardware store. Need a place to stay? Book a hotel. Need to get from A to B? Buy a car. Right?—Not necessarily!

Welcome to the collaborative consumption community, where goods and services are exchanged and shared rather than bought.

Now if you need a shovel, you can log onto Openshed and find someone in your local community that has one for you to borrow. If you need a place to stay you can book a room in someone’s house through a service like Airbnb. If you need a car for regular travel or occasional trips, you can join a car sharing organisation and get one locally. You save on time and money, reduce your environmental footprint and might even get to know your local community.

And if you have a spare room, or an under-used car or shovel, you can often use a scheme to make it available to others and get paid for your trouble.

The label “collaborative consumption” is fairly new, but the idea has been around for centuries. Bartering and exchanging goods was how many civilizations functioned in pre-market economies. Now facilitated by the ubiquity of the Internet, the shared economy allows for trade and sharing across town and across the seas as well as with your neighbour.

Here’s some examples of the ways you can save your money and the earth by sharing, not buying new.

Car Next Door is a Sydney based peer-to-peer car sharing service. It’s based on the idea of neighbours sharing their cars with others in the community for as litle as an hour or two. Drivemycar offers a similar service with a focus on longer terms (weeks or  months).

Will Davies from Car Next Door explains the new car sharing industry:

When I tell people about what we do, the most common response is “of course, it’s so obvious! Why has no one done this before?”  What we are doing with cars is turning something that is only used 5% of the time, into something that is used more often by more people.  This means that less cars are produced and less resources consumed.

Other car sharing services provide their own cars and include Goget, GreenShareCar and Flexicar (now owned by Hertz Australia).

AirBnB is a well established international service that connects people who have a spare room or a temporarily spare apartment with people who need a bed for a night or more. You could also try couchsurfing, a travel website that allows you to make connections with others travelers/communities as well as sleep on their spare bed–or couch!

Airtasker is innovative start-up based in Sydney now making its way into other cities around Australia. Here the idea is to share tasks or jobs that you need doing with others willing to do them. This can be anything from needing help to move house, being a mystery shopper, help with technology or putting together furniture.

Still on the topic of work, there are more creative ways to use office space than ever before, helping to reduce costs and connect with other similar businesses or organisations.  The Hub is a large office space that has been carefully designed to cater for up to 100 people to work at any one time. A ‘connection catalyst’ is assigned the role of creating connections between co-workers at the Hub, promoting collaborations and creative ideas beyond the advantage of a flexible work space. The Hub started in Melbourne, and has now expanded to Adelaide and Sydney. There are quite a number of co-working and office sharing spaces around our cities now – the Fetch maintains a list of about 50 different spaces in 7 Australian cities.

Co-working is not just about have a desk to work from as Brad Krauskopf, Hub Australia CEO and Founder, explains.

When small businesses connect and collaborate with one another they create a resilient network, it’s through the building of that social capital that they are able to build on ideas, services and products.

Freecycle has taken the world by storm and is very active all over Australia. Local areas have a freecycle group where people can post items that they no longer need as well as obtain items that are given away. You can find anything from bikes, to tools, to books and clothes, all for free.

The Clothing Exchange, one of the many clothes swaps in Australia, has local regular events in Adelaide, Brisbane, Melbourne, Perth and Sydney. The idea is simple: exchanging your clothes from your wardrobe for ‘new’ clothes, from someone else’s wardrobe.

Raising money for your great idea

Crowd funding can help you raise funds for your creative, social enterprise or business project. It’s a more intimate manner of raising funds that allows you to efficiently access large numbers of people willing to contribute small amounts of money. Crowd funding platforms include Pozible, with a focus on creative projects, StartSomeGood which focuses on social change projects and IndieGoGo with a bit of everthing. Pozible alone has raised an impressive $11 million to help creative ideas become reality.

Ultimately the sharing economy gets us to focus on how to fulfill our needs rather than starting with needing to own things. Things are often just one way our needs can be met.

Want to go further? What about sharing laundry with strangers?

People now commonly share cars, tools, and apartments with total strangers Getting what you need is as simple as firing up an app, finding a willing neighbour and reaping the benefits. But would you lend out your washing machine to a stranger to wash their clothes? Or do their laundry at home yourself? One of the most intriguing new businesses brought to life by the sharing economy may arise from project from two designers who applied the sharing economy concept to doing laundry. Original story in Wired.

Find the service you need

Collaborative Consumption, the international information hub for the sharing economy, has a directory of hundreds of services in more then 70 different categories, from parking spaces to toys and from kitchen stuff to local guides.

If you are in Sydney then the City of Sydney/Time Out guide is a great place to start.

The Unashamedly Creative list is dated August 2012 but appears to be up to date.

CollaborativeConsumption.com has a huge international database of collaborative consumption services in about 70 different categories. It’s a shame there is no way to filter by city or even country, so finding what you need takes a bit of clicking around.