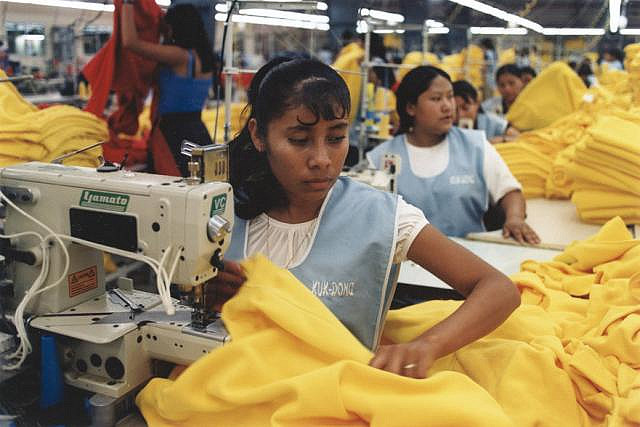 Tell us about Fair wear

FairWear is a grassroots campaign made up of individuals and organisations working to stop the exploitation of outworkers and sweatshop workers in the textile, clothing and footwear industries. Importantly, outworkers and sweatshop workers themselves have been involved in the campaign, challenging companies and politicians (in their own gentle way) to take action in response to the daily realities they face of below award wages, long hours of work, work injury, unrealistic deadlines and stressful working conditions.

FairWear commenced in late 1996, with a strong focus on engaging retailers with the Homeworkers Code of Practice, and aimed to make them take a share of responsibility for workers’ wages and conditions in their long supply chains. As victories were achieved, or developments made, we shifted out attention to a range of decision makers who had the power to make a difference in outworkers lives. This included manufacturers, state governments, peak bodies in retail and manufacturing, and the Federal Government. We were successful in gaining amendments to Work Choices that retained the protections for outworkers in state legislation.

What is an outworker?  Someone who works outside a formal factory, undertaking work in their home, or in their boss’s home or garage or sweatshop.  Typically in Australia a clothing outworker is someone working at home to for 12 to 16 hours a day, for as little as $3 to $5 an hour, producing clothing for well-known Australian clothing labels.  Often large orders are expected to be completed in very short turnaround times, making the work very stressful.

How did you get involved in Fair wear and what sparked your interest and concern in worker’s rights and clothing?

I worked for Asian Women at Work and we were involved in forming FairWear. FairWear was a response to regularly witnessing the extreme hardship experienced by migrant women workers in the Australian clothing industry; a contrast to the glossy, expensive image of the Australian fashion industry.  As outworkers came to understand the way retailers and manufacturers used long supply chains to avoid responsibility for fair wages and conditions, they too wanted to get involved in holding them to account, and force them to improve the daily reality for outworkers like themselves.

I have no special interest in clothing but this was where we found the most significant exploitation of migrant women workers occurring in Australia. Sewing machines are highly transportable tools for manufacturing, and around the world clothing workers are highly vulnerable as the machinery and the work can be highly mobile–from country to country, into sweatshops and into people’s homes–in search of cheaper labour.

Why is it important for consumers to consider working conditions when making purchases?

Consumer demand for cheaper clothing is partially driving the hunt for cheaper labour. We all love a bargain, but it is prudent to consider under what conditions your $5 T-shirt was made in China or Bangladesh.

Retailers and manufacturers have the largest power in supply chains, but if consumers refuse to participate in purchasing their goods, we have the power to change the practices of companies. We can very easily become silently complicit in the exploitation of workers here in Australia and overseas because working conditions are not a consideration in what we buy, and /or we do not know about the details of how a product was made.

FairWear recognised that Australia is only a small part of the international market, so to have any impact internationally we decided it was important to link up with international campaigns in order to challenge the practices of multinational clothing companies.

“I have worked as a clothing outworker for 17 years, ever since I resettled in Australia in 1994. In this time I have shed sweat and tears in a job where the pay I receive is incomparable to my efforts.”   Tho (Outworker):  You can read more of her reflections at the end of this article.

How can we as consumers change our consumption habits to have an impact? What should we look out for?

The strongest indication of positive behaviour by companies is if they display the Ethical Clothing Australia label on their clothing. This label shows to show they are accredited under the Homeworkers Code of Practice and are taking responsibility for the wages and conditions of workers in their Australian supply chains. The ECA label is only available for Australian made products, as we have no capacity to monitor the production of clothing outside Australia.

What actions do you take to make sure you have an impact?

For many years I shopped only at Op Shops or the small number of companies which had signed a binding deed with the TCF Union to take action on their supply chains. Now that we have an established accreditation process, I favour shopping from accredited companies. This can sometimes have its limitations as many of them are at the higher end of the clothing market. There are also retailers that are not accredited but have signed up to the Retailers part of the Homeworkers Code of Practice, so I choose to shop from them when an accredited company is not available for what I need. And there is still always the Op Shops.

For more information you can go to www.fairwear.org.au

What is your favourite FairWear purchase?

My T-shirts with the “No Sweat Shop” label on them. This label preceded the new Ethical Clothing Australia label. Since the shift to the ECA label, more companies have chosen to use the label, making clothes made under fair wages and conditions in Australia more readily identifiable.

To read FairWear’s interview with outworker Tho, Click here