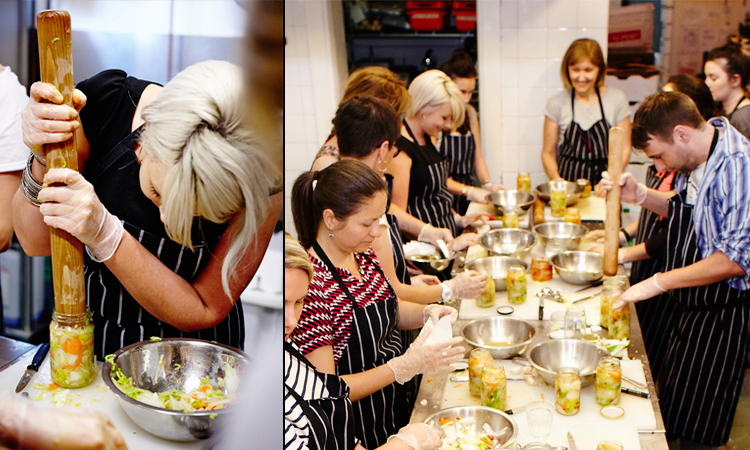 Food waste is a big issue. Consider the energy that goes into producing and transporting food from as far away as Europe and China, and the money spent on something that is then literally thrown away. Weigh it up against the environmental impact and the fact that many people go hungry, and it’s undeniable that we can do things better.

Jamie Edwards, founding pickler of Cornersmith, a family-run café based on sustainable and ethical principles, gives some advice on how we can be more conscious about fighting food wastage and being smarter consumers.

Ditch the supermarket for the farmers market

For her, one of the most effective methods is simple: stay out of supermarkets.

The majority of Australians live in cities, far removed from the farms and factories where food production and processing occurs. We’re happily oblivious to the amount of food wastage that occurs even before the food is transported. Close to 70 percent of produce gets turned back into the soil due to packaging standards, low prices and storage issues, where it gets compacted. And once compacted, something like an apple core can hang around as long as a coke can if there’s no oxygen to break it down.

Jamie lists “the disservice [supermarkets] do to farmers, the effects on labour, the lack of choice, the huge amount of waste” as just some of the negative consequences of the supermarket system. And this is even before the produce hits the shelves.

Another problem around packaged, sanitised, supermarket food is the food processing system. There’s no guarantee that a package’s ingredient list is full disclosure of what’s in a product or how it’s been handled. Take the example of pre-packaged or self-serve loose leaf salad. Something that, on your kitchen counter would turn brown in a day, stays a crisp, healthy green for the better part of a week. Why? Because it’s been coated with something called NatureSeal – an artificial construct designed to extend its shelf life – and one that is not classified as an ingredient and so doesn’t have to appear on the package. And suddenly, this fresh source of fibre and nutrients has become an insidious part of industrial food production.

There’s an unfortunate perception that the biggest obstacles around ethical eating are budget constraints. Growers markets often pitch themselves at those who can already afford to make the choice. This, however, says Jamie, is an illusion. Consumers have been sold the idea that the supermarket is cheaper and more convenient than getting fresh, locally grown produce from the markets, whereas the reality is that “there’s a bunch of coriander in Woollies for $4 when it’s $1.50 at the market”.

It’s undeniable that you’ll need to be more strategic about your weekly shopping and meal planning (no more after-work trips to the supermarket for that carton of eggs you forgot), but ultimately the decision to prioritise your time is just a choice that needs to be made.

Do the legwork and ask questions

Another important factor in being a mindful consumer is asking questions. This, for Jamie is another reason to get out of the supermarkets. “You can’t just ask anyone at the supermarket about the produce. They just don’t know. You may as well ask about a packet of chips. But you can do that at farmers markets. And to find your voice as a consumer is something that will serve you very well.”

Consider what’s most important to you, she suggests, whether organic, local, or ethical, and ask questions of the vendor. Do some research into what kind of answers you want to hear, to be able to decide whether this farming method, or that carbon footprint is acceptable to you.

It’s all about aligning your purchasing power with your personal convictions.

Jamie herself puts preference on local over organic, as there are “lots of issues around organic”. While she admits “not using pesticides and heavy metals in the soil are going to be good for the environment,” ultimately, local produce often comes from “small scale farms, which are a better options for the communities. Farmers have more control over the price they can ask.”

Finally, to become a conscious consumer you have to learn to cook and prepare food to make it last. This may involve up-skilling, but returns are worth it. Skills like fermenting, upcycling leftovers and turning scraps into preserves, help food go further by reducing waste and extending its shelf life.

Jamie gives the example of her ‘one chicken three meals’ dishes, where a roast chicken gets stripped and repurposed into a risotto the next day, and its bones reduced to stock for a soup on the third day. The $30 ethically raised chicken has been extended to cover three meals and suddenly becomes more affordable.

Food and cooking should be a pleasure, says Jamie, and being aware of the stories behind your food adds to your enjoyment of it. One way to make cooking less of a chore is to make it communal. Gather some friends and make a day of boiling broths, making passata or baking. This will also give you the opportunity to share your skills and learn from each other.

Fighting food waste really can be a simple, three-part process. Stay out of supermarkets. Do your research. And learn to cook.

So you don’t have money for ethical investments? Actually you do.
Join the Otter team!