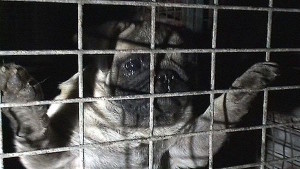 Janene Trickey was one of few reporters on a RSPCA Victoria rescue in January. She recounts what she saw, gives some background on puppy farms, and offers guidance to get a puppy not raised on a farm.

Unable to walk on leads, two smelly dogs with matted fur are carried to a table for examination by Australia’s only forensic veterinarian Rebecca Belousoff.

On 20 January, these dogs, along with 46 other dogs and 21 puppies, were seized from a puppy farm in regional Victoria by RSPCA inspectors. This marked the first time RSPCA Victoria has allowed journalists into their Animal Care Centre. The facility houses animals under protective custody until the legal owners surrender them, or are made to by a court.

“Our victims can’t speak,” said Allie Jalbert, inspectorate manager at RSPCA Victoria. “The vets have to gather evidence that will be sufficient for a prosecution, which can take months”.

The dogs tremble, obviously distrustful of humans. Everyone has to remain quiet and still. The smell of stale urine and feces is overwhelming as the vet inspects the animals for parasites.

Another section of the air-conditioned building houses more of the rescued dogs. There are four mothers with their puppies and one cocker spaniel ready to give birth at any moment. The spacious cages are clean, with fresh water and food, unlike the conditions the animals are used to.

Though RSPCA staff cannot say anything about the specifics of this case, they indicate it is on the worse end of the scale in terms of animal abuse and neglect. Illegally farmed dogs often have untreated joint, hip, knee, ear or eye issues and are possibly in-bred. Adult dogs often have behavioural issues to overcome before they can be re-homed with a loving family.

“They [puppy farmers] will breed whatever is popular. For a while it was smaller mixed breeds, but now we’re seeing larger dogs too,” said Ms Jalbert.

Large-scale operations, like this puppy farm, are becoming increasingly common. Dogs and cats are confined in crude and filthy conditions to produce puppies and kittens for profit. Puppy-farmed puppies generally turn up in pet stores or are advertised in classifieds online.

The Victorian Andrew’s Government is implementing plans to restrict the selling of puppies and kittens in pet stores. NSW Labor made the same pre-election promise. The RSPCA lobbied for the changes, along with Animals Australia and Oscar’s Law, a lobby group established to raise awareness of the issue in the lead up to the Victorian election.

Under the new arrangements, pet stores will only be able to sell puppies, kittens, dogs and cats linked to registered animal shelters. The changes will also cap the number of breeding female dogs to ten per facility by 2020. Breeding females will also be limited to five litters over their lifetime.

The pet store industry and registered breeding facilities are upset by the proposed changes to the law. They believe it will put many out of business. They also worry it will drive the trade further underground and make it difficult for people to buy a pure-bred puppy in future.

They blame consumers for the rise in the number of illegal puppy farms. Bob Croucher, of the Pet Industry Association of Australia, was quoted in The Age as saying “The public want an eight-week-old pup, they want it for their kids. Shelters do not sell eight-week-old pups.”

A Victorian Government media release states “the oversupply of cats and dogs means that up to 200,000 pets are destroyed every year. Labor’s plan will reduce the supply and reduce this devastating figure.”

However, simplifying the issue to one of oversupply fails to take into account other factors impacting the number of animals needing to be put down by responsible authorities.

People do abandon their pets, for a variety of reasons, and many are not microchipped, making it difficult to find an animal’s owner. Failure to de-sex dogs and cats can lead to unwanted litters of puppies and kittens.

The Lost Dogs Home in Melbourne has been criticized for its high euthanasia rates and a formal investigation has been launched. Part of a statement by Chairman Andrew Tribe reads: “Sadly, in animal welfare organisations like ours, not all the animals that we receive are either able to be rehabilitated, or will be adopted. That means part of our role is the humane euthanasia of animals. Every one of us at The Lost Dogs’ Home loves animals, and every animal that is put to sleep is a tragedy.”

Responsible pet ownership begins before a new pet comes home. Considerations include the size of a home and yard, the lifestyle of the family and the budget available for food and veterinary care.

Cats and dogs typically have a lifespan of 12 years and having a pet can make it more difficult to find rental accommodation or go away on holiday.

An alternative might be to foster a puppy for a while that will go on to become a seeing eye dog, customs dog or other kind of working dog. Or, perhaps there’s already a dog nearby who could do with a new friend for walks.

The RSPCA recommends people looking for a new puppy, kitten, dog or cat visit a rescue centre and adopt a pet in need of a home.

If the right pet can’t be found there over time, the next step is to find a reputable breeder and ensure the puppy has not come from a puppy farm.

All dogs and cats should be registered with local government, be microchipped and de-sexed, unless the animal will be used for breeding. They should also be vaccinated and vet checked annually and a well-trained dog is much easier and more enjoyable to live with.

Many local government areas now have cat curfews to prevent the killing of native wildlife. They insist cats remain indoors between dusk and dawn because the figures are alarming. The Australian Wildlife Conservancy estimates cats kill 75 million native animals in Australia every night.

Pets can be a wonderful addition to the family, or may become a burden. Planning well in advance and taking the necessary steps to ensure responsible pet ownership make the former more likely.