It’s Up to Us – a Changemakers Festival Event.

It’s up to us – we can make a difference!

As consumers we can make a difference. Whether it’s action on climate change, stopping animal cruelty or promoting fair trade, when it get’s down to it, it’s up to us! What we choose to buy affects whether or not businesses offer more sustainable products that respect the environment, the rights or workers and farmers, and the interests of animals. 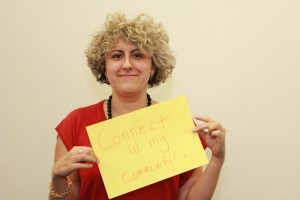 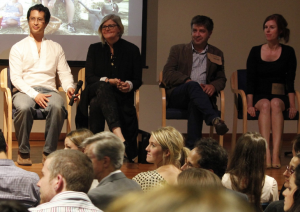 … by our speakers and audience … 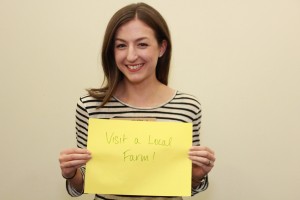 Come to Otter’s first event It’s Up to Us!

Come join us on the evening of Monday 4 November at the Mechanics School of Arts, 280 Pitt St in central Sydney. Meet other great people interested in using their consumer choices to change the world. There’ll be plenty of time to share your ideas and dilemmas over finger food or a sustainable beverage. Hear from inspiring speakers who’ll give you the opportunity to think more deeply about the consumer choices you make and – more importantly – offer up practical actions you could take in your day-to-day life. Be challenged to identify changes in your own life that will really make a difference in favour of people, the planet or animals.

We’ve got four great speakers who’ll talk about what business, government and social organisations are and aren’t doing – and what ordinary consumers like us can do to help to make a difference.

Melinda is the manager of the Green Villages program with the City of Sydney. Green Villages is working towards a Sustainable Sydney 2030 by inspiring and supporting residents to reduce their environmental and building footprint. Melinda has also worked as Climate Programs Leader at the Nature Conservation Council of NSW, where she ran the Community Climate Challenge, a community engagement program with 4 Local Governments and 2 000 households in rural and urban parts of the state. Melinda also kick-started the Smart Green Apartments program, working with Owners Corporations to improve the environmental performance of apartment buildings.

Prior to Food Connect, Julian co-founded the “Organic Buyers Group”, a not-for-profit organic box distribution group in Sydney and “Imago Forest”, a community supported agriculture farm business in the Hunter. Julian has direct experience of farmer circumstances having worked in the Sydney Basin promoting sustainable agriculture to the non-English speaking background market gardeners and in establishing and working on a commercial biodynamic market garden. Simon McRae, Ethical Clothing Australia

Simon is the National Manager of Ethical Clothing Australia (ECA). ECA are an independent body who accredit local clothing and footwear companies manufacturing in Australia to ensure they are paying workers their legal pay and entitlements. ECA also promotes their many ethically accredited brands and looks to promote initiatives that encourage an ethical approach to the TCF industry. Prior to working for ECA Simon worked for UK international development charity War on Want exposing the exploitation of workers in developing countries producing food, clothing etc. for many well-known UK high street stores and retailers. He has also worked with representatives  of the finance sector promoting sustainable development. Sam Mostyn, @sammostyn Sam is a sustainability adviser and non-executive director. She provides advice and sits on Boards in the corporate, government and non profit sectors, including at Virgin Australia, the Diversity Council of Australia, as a Commissioner of the Australian Football League and with the Sydney Theatre Company. As a senior executive at insurance company IAG she was responsible for its whole of company sustainability strategy. During Sam’s tenure IAG was named twice as Australian Sustainability Company of the year and launched its plan to become carbon neutral-achieved in 2012. In 2012 she was appointed to the Australian government’s National Sustainability Council.

Make a donation to support the event and Otter!

Otter helps you make safe, green and fair consumer choices. While waiting for the big day, why not sign up for your free copy of Otter enews for fortnightly advice on actions you can take now. It’s Up to Us! is part of the Changemakers Festival.